Skip to content
December 6, 2017
Dear friends and seekers,
Today marks a serious movement in the world’s march to its own drum, and to its own New Order. 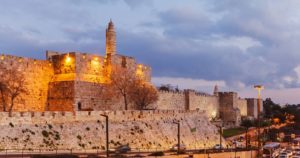 President Trump announced that the United States is recognizing Jerusalem as the capital of Israel. Notwithstanding that this represents a striking witness to his seizure of the reigns of power, in view of the abrogation of traditional Constitutional pathways that would normally mark out this kind of recognition, it links his emerging role with both that of the Vatican and other major religious and political powers.

The Oslo Accord forged in 1993 between Cardinal Ratzinger and Jesuit-trained Shimon Peres is an internationally recognized agreement that cannot be opposed by any rabbi, under pain of death or suppression.

As the Oslo Accord conveys title to critical areas of Jerusalem to the Vatican, today’s announcement can best be understood within the larger context of the creation of an international capital for the world and its growing governing infrastructure known as the New World Order. Given that the United Nations’ original purpose was stated to be preparation of the world to receive Lucifer, its god and ruler, then this recognition by the leader of the nation which has become the central western HQ for the global power, signals the final preparations for erection of the abomination of desolation, and the revelation of the “man of lawlessness.” It will include a false covenant and corresponding false peace, that usher in a religious abomination to steer humanity away from worship of the true God and toward worship of the creation — in the form of beast/ruler of darkness.

These steps are unequivocally necessary for the return of Christ who can come only after the man of lawlessness is revealed — something Paul wrote to the Thessalonians.

The figure of Donald Trump stands in a unique place having met with all of the key stakeholders in the Middle East, notably with Pope Francis (a Jesuit) and prior to the cabinet formation with Mitt Romney (member of the Jesuit-led LDS church and influential figure in the Bush DVD/CIA dark power world leadership), and also with Bibi Netanyahu in Israel.

While the mainstream media harps about destabilization of the middle east, the new world Order out of Chaos must come through the entry on the stage of one who will rule with a rod of iron — a counterfeit of the King of kings who sits on the divine throne. The world leader will only be revealed when the crown has been given to him.

Many figures have been pegged to be this Man of Lawlessness, but there is one, and he is out there, ready and prepared. So the people of God wait on the Lord, knowing that this figure will be revealed.

As for Israel, this squeeze play is being directed at Christendom through a number of channels including the Hebraic Roots movement which is being drawn in more and more each day by the lineage of the Pharisees who continue to substitute the Rothschild inspired nation of Israel for the Israel of God which Paul taught, those who are circumcised of heart and have a new name; they are born of the Spirit.

The political debates about Gaza, the Palestinians etc. by the mainstream media are simply distractions from the main event which must happen in a way that seems to be brokering peace as a covenant, albeit a false Abrahamic covenant.

These events are more evidence that the Lord’s inspiration to blow a horn in Zion was none too soon. Things may really move quickly after the first of the year, and will show us that we are not too many months/years away from the granting of a kingship which the world will all see. It is NOT the kingship which YHWH has granted to His Son.

We will be sending you a New Moon message very soon that will speak to a fitting meditation for this coming evening of the 19th of December. It will be based on Philippians 2 and is actually quite apropos of the new turn of events. More to come on that later.

We do, as the apostles remind us, give thanks in all things, and in this move today, we rejoice that it signals us to be one step closer to the kingdom of God which will come and rise above these kingdoms that are establishing themselves now (Isaiah 2:2), and that kingdom is not of this world — but rises above all these mountains.

Grace and Peace in the true Christ, Jesus, our Lord and Savior,

This site uses Akismet to reduce spam. Learn how your comment data is processed.